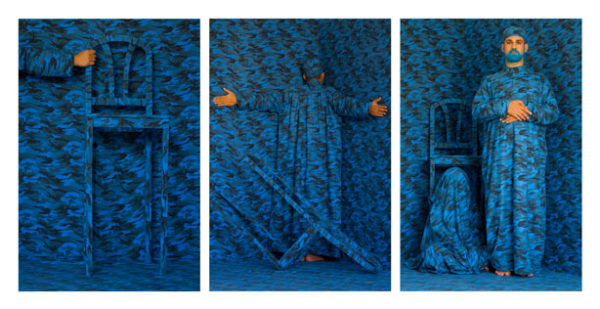 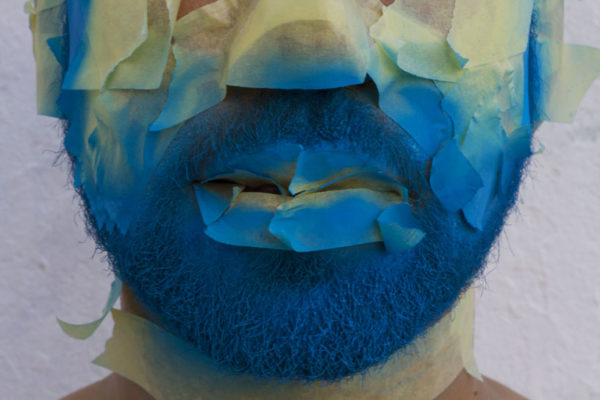 “Blue Beard” is a series of photos dealing with our discomfort facing today’s society.

The eyes turn to the imposing Blue Beard, whose reputation as an infamous ogre has preceded him and buried himself here, in a mysterious figure devilishly secret. If for Rose the body is guessed, for Blue beard the body asserts itself and drowns in an invading and fiercely persecuting blue.

Wearing his famous beard, which is known, neither as a sign of faith, nor an artifice, he drowns the body in the scenery for fear of assuming it or to be confused with what it cannot master. This camouflage is a way of striking a path towards what it tries to appropriate or to control.

His hand, an element emerging from this overflowing blue, is that which holds, dominates, pushes or crushes. This handing on what surrounds him does not prevent him from finding himself at the foot of the wall, he would not know what to do, turn back or push back the limits. Blue Beard must thus, face the multiplicity of aspects of a virility allegedly assumed. This blue submerging it, and from which it has made a refuge is henceforth like a cage of which, he does not see the door ajar. Is this blue finally synonymous with disillusionment, hope or strangeness? Only Blue beard will be able to say it, if he knows whether his Rose is in his hand or in his heart …»